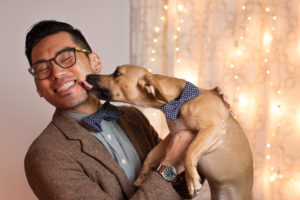 Life is better with dogs. Not only because they’re adorable weirdos, but because they make their people better.

Nearly all (93%) dog parents in the U.S. say their dog has made them a better person in at least one way, according to a new study released today by BarkBox, Bark & Co’s monthly box of goodies for dogs and their humans. The first BarkBox Dog Parent Study found that dogs overwhelmingly have had a positive impact on a range of emotional, behavioral and even physical qualities in their people.

You Say “Boundaries!” Dog People Say, “What Are Those?”

Long gone are the days of “ownership” and relegating dog to tiny houses in the back yard. Today’s generation of modern dog parents welcome their pups into every area of their lives, even the bedroom and bathroom. There’s no such thing as oversharing when it comes to dogs.

Your Reply When People Say You Spend Too Much Time With Your Dog: Bite Me

There’s no denying the genuine love that people have for their dogs. More than four in five (83%) dog people consider their pup to be their best friend, validating the old adage. In fact, close to nine in ten (87%) dog parents say they love their dog more than they ever thought possible and more than half (56%) wish their dog could understand how much they mean to them. For many, the bond between man and dog even rivals the selfless love between humans.

The study also found that buying toys and treats each month was a top way that dog parents make their dogs happy, which is only confirmed by the rapid growth of BarkBox. Since launching in 2012, BarkBox has shipped more than 30 million toys and treats to dearly loved pups in the U.S. and Canada. The curated box of all-natural treats, chews and fun toys designed – from the packaging to products – to create moments of insane joy for dogs and their people has a new, fun theme each month. Dog-obsessed experts paw-pick the best treats and innovative toys to match a dog’s unique needs, including allergies or heavy chewers.