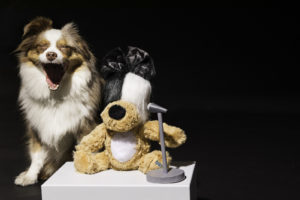 In celebration of Adopt a Shelter Dog Month in October, BARK unveiled Sia’s Lickalike – a new limited-edition BARK Original dog toy in partnership with singer-songwriter, Sia. For every Lickalike toy purchased, BARK will donate all profits to Animal Haven’s Recovery Road. BARK customers and Sia fans can buy the toy here at barkshop.com.

“Since the early days of BARK, we’ve looked for ways to help and support dogs in need,” said Matt Meeker, BARK co-founder and CEO. “We’re thrilled to team up with Sia to give her fans and dog people everywhere a fun way to support the phenomenal work by our friends at Animal Haven.”

A BARK Original toy, Sia’s Lickalike was co-designed by BARK and Sia, and features a toy version of BARK’s iconic doodle character wearing Sia’s signature wig. All profits from the limited-edition toy will go to Animal Haven to help dogs in need find their forever home.

“I’m excited to have collaborated with BARK to help raise money for Animal Haven and bring further awareness to Adopt a Shelter Dog Month,” said Sia.

Both BARK and Sia are longtime supporters of Animal Haven. Sia has volunteered at Animal Haven for years – even prior to her international success – and has since teamed up for the organization’s fundraising videos and performed at its events. BARK often features Animal Haven dogs in social media content to help get the pups adopted by putting them in front of the company’s 6M+ audience, and several employees have adopted Animal Haven’s dogs into the BARK family. BARK has also supported the Animal Haven’s efforts financially.

Animal Haven’s Recovery Road fund is designed to help animals at the shelter that need extra medical care. Whether it’s a life-saving surgery or a simple procedure to alleviate pain and discomfort, Animal Haven counts on the generosity of The Recovery Road Fund to give these animals a second chance.

BARK (formerly Bark & Co) is a pack of crazy dog people dedicated to making pups and their people happy. At BARK, dogs aren’t pets; they’re family and deserve the best. Since launching in 2012 with BarkBox, a monthly themed box of clever toys and all-natural snacks, BARK has shipped more than 50 million products and expanded into creating its own toys and snacks that can be found on barkshop.com. BARK’s pack sits and stays in Chinatown NYC and Columbus, OH. To learn more, sniff around at bark.co, barkbox.com and barkshop.com.