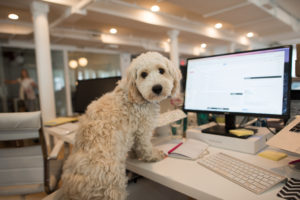 For all kinds of reasons, many dog people would rather hang out with dogs than other humans.

That’s why today we’re launching the first-ever “dog bot” on Twitter, allowing humans to get answers to frequently asked questions about BarkBox in a private direct message conversation with a well-behaved and incredibly helpful digital Border Collie (a breed known for their smarts).

Interacting with the dog bot on Twitter – just like interactions with the 100+ dog-obsessed humans on Bark & Co’s Happy pupstomer experience team based in Columbus, OH – is just as hilarious as it is helpful, and filled with the dog puns and funny GIFs that BarkBox is known for. The dog bot can help current customers and those considering signing up with a range of questions, but if something comes up that the dog bot is not able to answer, a Happy human ambassador will jump in.

Bark & Co was built on social media with more than 5 million fanatical followers across its BarkBox, BarkShop and BarkPost channels on various platforms, and it’s the place that most BarkBox subscribers discovered they could get a curated box of goodies for an insanely fun time with their dog every month.

The dog bot was custom built for Bark & Co by Reply.ai. It follows the less intelligent “Talk to a dog” option on Bark & Co’s phone line, which is just a bunch of incoherent barking, but shockingly chosen by 11% of all callers!

Test out the dog bot on the BarkBox Twitter page.